Due to unprecedented demand Landlords are now needed for awaiting tenants. Please click the image above for further information.

Failsworth is generally seen as the town linking Oldham to Manchester yet it was countryside until comparatively recent times and the boom of the Industrial Revolution.

Little more than 300 years ago its population was over just 1,000, today it is about 21,000. Farming was the main industry of the area with villagers supplementing their meager incomes by hand-loom weaving until the advent of cotton and the Industrial Revolution.

People of the area still maintain a strong community spirit and their pride in Failsworth is fierce. A major landmark of the area is Failsworth Pole on Oldham Road. The first ‘political pole’ was erected in 1793 although a local historian suggests there were others before and that Maypoles probably stood on the site for centuries. The pole that now stands on the site replaced the last one, blown down in 1923.

Failsworth is famous for its hats. Manufacture began as a cottage industry before the firm of Failsworth Hats was set up in 1892 to manufacture silk hats. For a time the company operated from a factory near the former Failsworth Council offices and continued until recently (2002), in the area.The canal development which is presently under construction has in part taken the place of this legendary company.Today, Failsworth’s main areas of economic activities are in electrical goods manufacture through Pifco Limited (now Salton),plastic producers and distributors Hubron Limited together with a good variety of smaller independant retail and professional service companies. Failsworth is an up and coming location and has excellent comunication links with the recently completed M60 ring road.

Failsworth has an area of 1,073 acres. The surface slopes somewhat to the brooks which bound it on the north-west and south-east, and rises slightly towards the east. It had formerly three hamlets: Doblane End, Wrigley Head, and Mill Houses. The population in 1901 was 14,152.

It is traversed near the northern boundary by the road from Manchester to Oldham, which is lined all the way with houses and factories; parallel to this for part of the way is the Street, part of a Roman road from Manchester, and from it branches off a road to the east, through the hamlets called Street End and Holt Lane End. The Lancashire and Yorkshire Company’s railway from Manchester to Oldham runs through to the north of the high road, with a station near the middle called Failsworth. The Rochdale Canal crosses the north-west corner, and the Oldham Canal passes near the eastern border.

The industries of the place are the old ones of silk weaving and hat-making. To these have been added cotton-spinning, to which the growth of the place is mainly due, and an engineering works.

Only one house had as many as four hearths liable to the hearth tax in 1666; the total number was 69.

A local board was formed in 1863.  In 1894 an urban district council of twelve members took its place; the township is divided into two wards, the Higher and the Lower. It possesses a town hall and a cemetery.

Clayton mill, serving for the Byron manors, was locally in Failsworth.

At the survey of 1212 it was found that FAILSWORTH, rated as four oxgangs of land, was held in moieties by different tenures. Two of the oxgangs were held of the king by Adam de Prestwich in the gnage, by a rent of 4s.,Adam’s under-tenant being Gilbert de Notton, who held by the same rent. The other two oxgangs were held by the lord of Manchester as part of his fee, and had by Robert Grelley been added to the grant of Clayton to Robert de Byron, the tenure being knight’s service. The Prestwich moiety was also acquired by the Grelleys and granted to the Byrons,  so that this family held the entire township. It descended like Clayton, and was acquired by the Chethams; but a considerable portion of the land appears to have been sold to smaller holders, who had perhaps been tenants.

The abbey of Cockers and held land in Failsworth by grant of the Byrons.

The land tax return of 1787 shows that Mordecai Greene was then the principal owner, paying nearly a fourth of the tax. George Smith, John Birch, Edward Greaves, and Sir Watts Horton together paid about the same amount.

Accounts of many of the old dwellings, as well as of the families, may be seen in Mr. H. T. Crofton’s Newton Chapelry.  A complete valuation of the township, made in 1794, is printed in the same work.

In connexion with the Established Church St. John’s was built in 1846; the rector is presented by the Crown and the Bishop of Manchester alternately.  A new district, Holy Trinity, has recently been formed; the patronage is the same, but no church has yet been built. 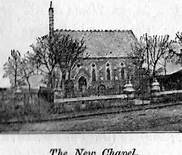 The old school, built in 1785 by subscription, is now a Free-thought Institute.

The Wesleyans had a chapel at Wrigley Head, built in 1787; it is now a workshop. The Methodist New Connexion, which appeared in 1797, has a chapel called Bethel, built in 1811. The Sweden borgians opened a cottage for services in 1841; the present church, the fifth used, was built in 1889.

In 1662 John Walker was ejected from the chapel of Newton, and he and his successors ministered tot he Nonconformists in the neighbourhood. Newton chapel itself seems to have been the usual meeting place, but about 1698 Dob Lane Chapel, on the Failsworth side of the boundary, was erected. It was sacked in 1715 by the ‘Church and King’ rioters. The present chapel was built in 1878–9 on the site of the old one. The congregation has been Unitarian for more than a century.

The Roman Catholic church of the Immaculate Conception was opened in 1865.

Source: ’Townships: Failsworth’, A History of the County of Lancaster: